Miss Hickory’s Tea Room offers our ‘High Tea’ Sampler every day.
If you would like to have a High Tea, please let us know in advance when making your reservation. 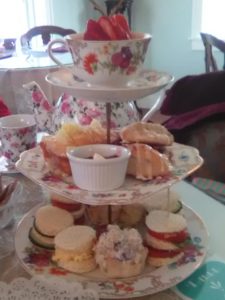 “High tea is an English meal that gained popularity in the 1600s, especially among laborers. It was often substantial, contrasted with other types of tea where a few cakes might be served. The meal was often called meat tea because hearty dishes were served, including meat sandwiches and hot cooked food, like meat pies and Welsh rarebit. Cold meats, bread, cheese, crackers, and a variety of desserts like cakes could make up part of the menu.”

“For the laboring class, high tea was usually a part of the evening meal, taken after sunset. In this case, cooked meats, stews, and the like might be part of the meal. Unlike the tea traditionally served at 4 or 5pm, farming and laboring families tended to eat between 5 and 6 pm, and the meal was usually more closely related to dinner or supper. Substantial food was needed at this time, particularly since families might need to resume work afterwards.”

“For laborers and farmers, this was a daily traditional meal, not something consumed only occasionally. The definition has recently undergone some changes, however, especially for non-UK countries. Now, high tea often refers to a more traditional tea with lighter meal and dessert offerings. This is often how the term is used outside of England.”

“The modern version is more closely related to Afternoon Tea. Light sandwiches may be offered. Scones and Devonshire cream are common and cakes, pastries, petit fours, or a number of other dessert items can make up the offerings. When scones and cream are served, the meal might also be called ‘cream tea.’”

“Even in England, where having afternoon tea was traditional, an elaborate cream tea is usually for special events only. Sometimes, afternoon tea is a weekend meal, or one might go to an afternoon tea at a restaurant, tea shop, or hotel. When restaurants outside of the UK feature high tea, they are usually referring to afternoon or cream tea, and will feature many fancy cakes or pastries in addition to finger sandwiches.”

“In the UK, it still may be common to have a quick snack and a cup of tea at 4pm as a restorative. Especially with children arriving home from school at about this time, an afternoon snack is usually fairly desirable. High tea, as the term is now used, would not be regularly served and might only occur on weekends, at parties, or on special occasions.”

“The recent switch to the use of high tea in the US, which occurred in the 1950s, comes primarily from the word ‘high’ being used as a synonym for ‘elegant’ or ‘formal.’ In the UK, if someone is looking for this type of meal, he or she may want to look instead for cream tea or afternoon tea, which are still more commonly used to suggest a fancy tea.”

Want to learn more about Miss Hickory's Tea Room and how we got started?