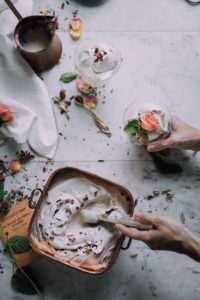 Once, during the summer, Miss Hickory’s Tea Room is planning to host an Ice Cream Social.

Our Ice Cream Socials will introduce you to a gentler way of life, where the time you spend with your child is always ‘quality’ time! 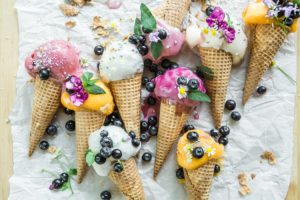 What is an Ice Cream Social?

“Very popular in the early 1900s, Ice Cream Socials were held in communities to commemorate special events throughout the summer months.

It was a time when socializing was at its best.

The grown-ups would mingle,

while the children would play on the grounds.

are still being played today.

Other games would be slightly different or completely unknown.

The games described here, like many other games of their time, require only items found at home.”

“This game is similar to several games that children play now. To start the game, everyone gets in a circle. One person will be “it” and will run around the circle. He/she will eventually touch someone on the back and say “Come with me!” They run in opposite directions around the circle. When they meet, they take hold of each other’s hands, swing once and race for the vacant place. Whoever arrives there first remains in the place while the other continues the game.”

“This game requires a knotted handkerchief, slate, and chalk. Everyone is in a circle and sitting down. One person has the knotted handkerchief and will toss it to someone, saying “Bird!” or “Beast!” or “Fish!” That person has ten seconds to respond by naming a type of bird, beast, or fish–whichever one was said. A name can only be said once and will be written down on the slate. The person with the handkerchief then tosses it to someone else. This game could supplement a science unit dealing with animals, or the categories could be changed to fit other subject areas.”

“Before playing this game you may have to explain the concept of a “general store,” a small store that had almost anything in it–everything from food to fabric to tools. It could have been the only store nearly to get supplies. To play the game one person starts by saying “My grandfather owns a general store and in it he has _____.” The mentioned item must begin with the letter “a.” The next person repeats the phrase and adds something that begins with “b.” The game continues through the alphabet until “z” names the entire list.”

“The players are divided into small, even groups. Each person has 7 dried beans. One person starts the game by placing his hands behind his back and putting any number of beans in his/her right hand. Then he/she turns to the person on the right, puts out his/her right hand, and says “Hull gull, hands full, parcel, how many?” If the guess is correct, the person gets the beans in the right hand. If the guess is wrong, the second person makes up the difference by giving him the number of beans he missed. For example, he would have to give the person two beans if he had guessed three and there had really been five in the right hand. The second person then turns to the person on the right and continues. When time is called, the person who has the most beans wins. More beans may be used. This is an excellent game to practice math skills.”

“In this game the first person says to the next, “My grandmother doesn’t like t.” He asks the first, “What does she like?” The first responds with a type of food or drink. The moderator knows what the Grandmother likes (nothing with the letter “T” in it) and answers yes or no. The players listen to what the words have in common and discover that she does not like any food or drinks with the letter “T” in it. Once they know the secret, they call still play the game by always naming food and drinks without the letter “T” in it. They may also change the letter. This game is a fun way to practice spelling.”

“Arrange four chairs in a square so that each one faces another. Have three girls sitting in three of the four chairs. One boy stands behind each of the chairs. The boy with an empty chair winks at one of the girls, who then attempts to go to the empty chair while the boy behind her tries to prevent her by placing his hands on her shoulders when she starts to move. “Winkum” is a parlor game and provided an excellent opportunity for boys and girls to flirt in an acceptable manner.”

“The players sit in a circle. One says, “Cupid’s coming.” The player next to him asks, “How is he coming?” The first replies, “He’s _________ing.” And so on around the circle each with a verb ending in “ing” such as running, skipping, etc. This game can be used when studying verbs in English. During the game if a player is unable to supply the correct answer, he/she may pay a “forfeit.” A “forfeit” can include any type of challenge, such as hopping on one foot or solving a riddle (“Leave with two legs and return with six legs.” They return carrying a chair).”

Please refer to our

Calendar of the Events

Want to learn more about Miss Hickory's Tea Room and how we got started?